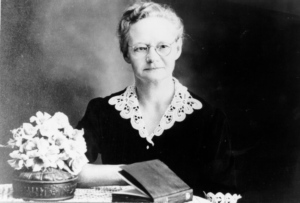 On December 15, 1879, Bertha Lorena Stanfield was born to Joab and Gulielma (Macy) Stanfield in the Quaker community of Mount Ayr in Mount Ayr Township, Osborne County, Kansas.  She was a lifelong member of the Friends Church and while a teenager she gave Sunday School lessons in her father’s shed.  On December 28, 1899, she was married in the Mount Ayr Friends Church to Clinton R. Bales.  The couple’s first house after their marriage was a stone dugout, where their three children were born–Leo, Mildred, and Leonard.  Shortly afterwards Bertha heard the calling of her Lord and desired to become a minister.  She could not enter any bible college in the West, so with her husband and small son she moved to Cleveland, Ohio, for a year and attended Cleveland Bible College.  In 1912 Bertha was recorded as a minister in the Friends Church.

During the years Bertha pastored at the Mount Ayr Church she would not accept any salary, knowing the financial condition of the church due to the dust storms, droughts, and crop failures that continually plagued the congregation.  She often hired girls to help with her own household work so that she could adequately carry out her pastoral duties.  She was certainly dedicated to doing the Lord’s work and in the salvation of souls for Christ.  For many years she held church services on Sunday afternoons at the Fairwest School, District Number 38, near Mount Ayr.  Bouquets made from flowers raised in Bertha’s garden were taken to the homes of sick friends as she went to visit them.  She was an avid gardener, raising vegetables and flowers.  She also canned many foods for winter use.

In her home Bertha cared for her mother-in-law, Martha Bales, following a fall resulting in a broken hip, and her husband, Clinton, who suffered from cancer.  Her care load became so heavy that Martha was moved to another home for care.  Clinton died in March 1942, three weeks before Martha’s death that April.  After the death of her husband Bertha helped Cora Gregory with pastoral work at Ontario, Oregon, and also Frieda Craven in Emporia, Kansas.  In her last years she moved into the Parkview Manor Care Home in Osborne, Kansas, where she ministered to the residents there and was long a comforting presence for many.  Bertha passed away May 27, 1976, in Osborne and was buried in the Mount Ayr Cemetery.