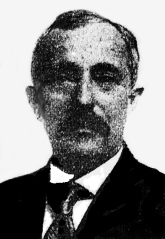 Another of the outstanding doctors who have served the citizens of Osborne County, Kansas, over the past 125 years was Charles Leo Ebnother.  Charles was born at Montlingen in Canton St. Gall, Switzerland, on April 17, 1853.  His father, Jacob Ebnother, was a farmer, wine maker, and merchant.  Charles’ mother was Magdalena Nachbour.  At age thirteen Charles emigrated with his parents to America and settled on a farm near Minster, Ohio.  He was a farm laborer for three years and then for six years he was a student at Carthagenia College.  From there Charles went to Eureka, California, where he both taught and attended school.  Returning east he entered the medical department at the University of Iowa in Iowa City, Iowa, from which he graduated in 1883.

At Iowa City in 1880 Charles married Fannie Goetz  After graduation he practiced medicine in Iowa City for two years, and in 1885 moved to McPherson, Kansas.  Mrs. Ebnother died there in 1887, as did their son, William, who was only sixteen months old.  That same year Charles relocated his medical practice to Hugoton, Kansas, where he served as Stevens County Coroner and Health Officer from 1890 to 1896.  On October 3, 1888, he married Emma L. Shriver in Hugoton.  They had three children, Charles, Raymond, and Margaret.  His interest in farming led Charles to acquire 960 acres of Stevens County land, which he continued to farm throughout the remainder of his life.

Charles moved his family to Downs, Kansas, in 1897.  From his brother, James Ebnother, he bought a half interest in the local drugstore and also established a medical and surgical practice.  In 1901 he started his own drugstore in Downs, and became a partner in several other businesses.  In 1919 he was honored with inclusion in the biography series Kansas and Kansans.

“Whenever you need anything in the drug line you always want to be sure you are getting the genuine article, and when convinced on this most important point you will always trade at that store.  This is one of the chief reasons why Ebnother’s Pharmacy enjoys such a liberal patronage from the people of Downs and surrounding country.  They carry one of the best stocks of drugs in this section of the country, and by persistent and legitimate business methods have built up a splendid trade.  In connection the firm operates a soda fountain, and it is said to be the finest in Kansas west of Beloit.” — Downs News,July 9, 1914.

In October 1918 Charles’ son Raymond died while serving overseas in World War I.  The news broke Dr. Ebnother’s already fragile health and he died March 12, 1919, in Downs.  He was laid to rest next to the body of his son in the Downs Cemetery.