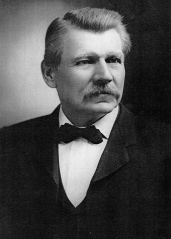 “’Joe Ford is dead.’  This brief sentence which passed from lip to lip on Thursday morning produced a profound sensation, notwithstanding the fact that his death had been expected for months.  It just didn’t seem true when it came.  Mr. Ford had been associated with Osborne for a half century, lacking one year, and the people had become so accustomed to his presence and his annual benefactions that it seemed he was a part of the life of the city itself, and therefore eternal.  No town in Kansas can boast of his parallel.  He was one of the most unique characters Osborne has ever known.  Mr. Ford, whose full name was Joseph P. Ford, was born in Lancaster County, Pennsylvania, January 15, 1839.  He seldom mentioned himself in any way and very little is known of his early history.  He came to Osborne on foot in 1878.  He had twenty-seven dollars in his pocket when he reached the townsite.  He had walked most of the way from Philadelphia [Pennsylvania] to Osborne.  No one here had ever heard of him and he had no friends or relatives here.  How he happened to pick Osborne as his future home no man knows this day.  He was by no means a tramp, however, because he walked into town.  He was not looking for alms.  He was looking for work.  He found it at his trade as a carpenter, which he followed in Osborne for twenty years.  Then he bought a lumber yard and went into business for himself.  The office of his lumber yard stood where the former Farmers Union cream station stands [1927].  He remained in the lumber business for ten years and then retired.

During the time he was engaged in business and working at his trade here he took an active interest in everything that was for the benefit of the town and county.  He never ran for office and had no political aspirations whatever, although he was intensely interested in the welfare of the city, county, state and nation, but he was content to let others seek the honors and preferred to remain a humble private citizen.  He never married, and throughout his long and eventful life he walked the pathway of life alone.  Whether or not he ever had a serious love affair is not known.  It is certain that he never sought the society of the opposite sex after coming to Osborne.  He was then in his late thirties.  Many believed he had had a love affair and had been disappointed, but if he had he did not allow it to sour him or destroy his faith in humanity.  He was extremely frugal and lived in the most simple manner, actually denying himself the comforts and  some of the necessities of life, and it is but natural that he accumulated a large amount of money and property.  He was not a miser who accumulated money merely for the hoarding of it, but he disposed of it in large gifts to charity, to churches, hospitals, etc.  He was scrupulously honest and would walk a mile to pay a debt.  He would also walk a mile to collect one, for he expected others to be just as strict in their business methods as he was.  He paid what he owed and demanded the same of others.  But he was by no means  a hard taskmaker who was merciless in his methods.  He has loaned money many times to men in hard circumstances, and he especially liked to loan money to men with which to build a home.

He was always a man with a charitable turn of mind and was much interested in helping the needy during all the time he lived here, but it was not until within the past ten years that he appeared to center his entire thought upon doing good with his accumulated property.  It was largely through the influence of Reverend H. J. Lorenz, a former Methodist minister here, that he became interested in church work and later his soul was stirred religiously under the fiery gospel preached by Aimee Semple McPherson at a series of meetings she held atWichita.  He made large gifts to Bethany Hospital at Kansas City, and became especially interested in the Methodist Church building and parsonage in this city.  He completely rebuilt the basement in the church here, doing much of the work with his own hands and in his honor the rooms he fitted up there have been named [the] ‘Ford Parlors’.  He gave liberally to the church budget and had the church building completely redecorated inside just prior to the meeting of the annual conference here in 1925.  He purchased and presented to the church a handsome concert grand piano, besides many other gifts and benefactions too numerous to recall to memory.

However, he was not alone interested in giving to theMethodistChurch. He was an intense lover  of children, and although he had accumulated wealth himself his sympathies were always with the poor, and he preferred to be identified with them.  He disposed of all his property in the shape of real estate and purchased securities, the interest from which he spent on charity.  Several years ago he inaugurated the custom of securing a list of the needy families in Osborne and visiting them on Christmas Day with bounteous supplies of necessities of all kinds, including eatables and coal, and always candy for the children of families.  Until his eyesight and health failed he would accompany each load of supplies some times dressed as Santa Claus, and personally oversee their distribution.  Each year he has spent $1000 in this manner, bringing cheer and actual comfort into homes which were in real need.  For the past two years he has been unable to accompany the truck which made the deliveries, because he had become totally blind, but he knew to whom each load of coal, each sack of flour and each generous portion of meat, beans and potatoes were going and left the matter of distributing them to tried and trusted friends.  It is said that he has made provision in his will that this same amount shall be spent each year after his death, a trust fund having  been formed for that purpose to be dispersed by a board composed of the members from the Methodist, Christian, Presbyterian, and Congregational Churches in Osborne.  Also, his will placed $2500 in account, from the interest of which the upkeep and repairs of the Ford Parlors could be made indefinitely.  In addition, another $1000 was to be used as a permanent fund from which funds could be drawn for use in the upkeep and repairs of theMethodistChurchbuilding itself.

Joseph P. Ford died in Osborne onThursday, September 29, 1927, having reached the age of eighty-eight years, eight months and fourteen days.  He was a man of vigorous and robust body and a keen, alert mind.  He was friendly and courteous in his manner to all his acquaintances, but there was something of the hermit about him in his private life.  He was absolutely clean in his habits and frugal and economical in his affairs, but he was ever generous to his friends and immediately responsive to appeals for worthy charity.  The only person he ever slighted or appeared to be careless of was himself.  His own needs and desires apparently never interested him in the least.  He denied himself all luxuries and lived in the plainest possible manner in order that he might have more money to give others.  When he died he did not own a foot of land on earth save the lot in the Osborne Cemetery on which he had long since erected a suitable stone and built a vault to receive his casket.  The roof over his head during the last few years of his life belonged to another, and was secured by the payment of rental.  During the past two years he has been cared for by Walter Hodges, and his business affairs have been faithfully looked after by E. B. Roadhouse.  Both men shared his humble home with him.  Mr. and Mrs. J. W. Shaffer, who have known him for years, have been his most faithful friends and have personally ministered to him for many years.  Many others have dropped in to visit him and were always met with a cheery smile and a cordial handshake.  His sole pleasure in life appeared to be to make someone happy, and doing this he totally forgot himself and ignored his own pleasure and comfort.  In his daily life he perhaps came as near exemplifying in this city Christianity as any man in this city has ever done.  At the time of his death he had only one known relative, a niece, Mary Dutton, of Coatsville, Pennsylvania.  He was a man of few words, but the record of his good deeds would fill a book.  Like Abou Ben Adhem of old ‘He loved his fellowmen,’ and when the record of his life is finally made up it will be found that Joe Ford’s name will be near the top of the list of those the Lord loved best.

The funeral services were held at the Methodist Church at 3:00 o’clockon Sunday afternoon, attended by a crowd that packed every part of the large auditorium of the building.  Reverend LeRoy F. Arend led the service, and Robert R. Hays, representing the city of Osborne, spoke briefly and feelingly of the vast service the deceased had performed for the city and voiced the appreciation of the community.  Following the impressive ceremonies at the church the body was taken away to the Osborne Cemetery where a vault had been prepared by Mr. Ford himself, and there the remains were laid to rest until the final summons.” — Osborne County Farmer, October 6, 1927.