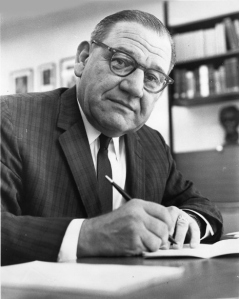 The son of one eminent Osborne County physician did his father proud in becoming instrumental in changing the direction of national mental health treatment in the United States for much of the twentieth century.  Robert Hanna Felix, known affectionately as “The Kansas Windstorm,” was born in Downs, Kansas, May 29, 1904, to Doctor Tasso O. and Neva (Trusdle) Felix.  He grew up in Downs and graduated from the high school there in 1921.  Bob then attended the University of Colorado at Boulder, where he graduated from the medical school in 1930.  After his residency he joined the U.S. Public Health Service in 1933 as a licensed psychiatrist.  On June 18, 1933, Robert married Esther Wagner in Denver, Colorado, and they later became the parents of a daughter, Mary Katherine. During World War II Bob earned his master’s degree from the John Hopkins University School of Public Health.  He then served as senior medical officer at the U.S. Coast Guard Academy and became the overall chief of the Medical Hygiene Division for the U.S. Public Health Service.  His greatest achievement came when he helped develop the National Mental Health Act of 1946, the first-ever federal legislation focusing on the mental health field.  It established the National Institute of Mental Health to serve as a focal point in directing major reforms and all research in the field.  In 1949 he became the first director of this facility.

“As its first director, Dr. Felix had a total commitment to the Institute, which grew under his leadership to nearly a quarter-billion dollar annual budget.  It was the foremost Institute of the National Institutes of Health constellation in its application of new knowledge and the fruits of research to patient care at the local community level.  Its activities in research, training, and service were so inextricably interwoven that it weathered several vigorous administration-inspired study group and task force efforts to disassemble it in the early sixties. With Dr. Felix’s combination of personal charm, administrative capacity, and political adroitness, together with an irascible refusal to back down on a matter in which he believed, he emerged as the master strategist in those confrontations, and the Institute survived, stronger than ever.  Congress in one decade manifested its confidence in the administration of “The Kansas Windstorm” by increasing Institute budgets by $120 million over requests.  His activities in national and international organizations and his awards and honors were myriad.” — From the June 1974 handout for Dr. Felix’s official retirement dinner as Dean of the St. Louis University School of Medicine.

During his life Bob was a member of numerous professional organizations and served on the editorial board of a number of trade periodicals, among them The Psychiatric Bulletin, The Quarterly Journal of Studies of Alcohol, and The American Journal of Psychiatry.  He was president of the Southern Psychiatric Association in 1946-47 and also a past president of the American Psychiatric Association. He was the recipient of many honorary degrees from various universities and he was honored with several distinguished awards from the academic world.  In 1963 he was awarded the Salmon Medal by the New York Academy of Medicine for his contributions to the field of psychiatry.  Bob also received the Nolan Medal, the D. C. Lewis Award, the Edward A. Strucker Medal, the Rubin Award, and the Norlin Award from theUniversityofColoradoas an outstanding alumnus.  The 1961 Rockefeller Service Award was given to Bob for his extraordinary service to the nation in the field of science, and in 1964 he received both the National Conference of Social Welfare Award and the Bronfman Prize, given to him by the American Public Health Association.  His award citation named him “a prime architect in creating national programs which revolutionized mental health research, training and care of the mentally ill.” Bob was a longtime mental health advisor to the World Health Organization (1952-78).  In 1957 he was commissioned an Assistant U.S. Surgeon General by the U.S. Public Health Service.  In October 1964 he retired after fifteen years as the National Institute’s director to become a professor of psychiatry and Dean of the School of Medicine at St. Louis University in St. Louis, Missouri. “The entire program of the Institute reflects his [Dr. Felix’s] foresight, administrative skills, professional knowledge and his ability to articulate its technical, scientific, and humanitarian needs and achievements.  Dr. Felix has been an extraordinary effective leader in the development of a new national mental health program based on knowledge, common sense, and concern for human dignity.  His qualities of leadership persuasion have helped to rally thousands of professional persons and interested citizens to his belief that the mentally ill can best be served by a community-based program of treatment providing a continuity of care, available to everyone at the time of need.” – Then-U.S. Surgeon General Luther Terry in his announcement of the retirement of Dr. Robert Felix. After ten years as head of the St. Louis University School of Medicine, Bob relinquished the post and became Dean Emeritus. “Bob was realistically aware that God had given him an abundance of unusual talents–personal charm, leadership skills, political adroitness, unflinching courage–and day after day he applied those talents to the challenges and opportunities that came his way.  In the farewell testimony to Bob when he retired as dean here in 1974, a very telling comparison was made between his career and that of his contemporary –Pope John XXIII.  Both were in their senior years when selected.  Most people expected a settled caretaker government of each of them.  But each began to open doors and windows never before tried, wrought profound changes, and left an institution which could never be quite the same as it was before his leadership left its mark.” — From the eulogy given by Paul Reinert, S. J., at the memorial services for Dr. Robert H. Felix at St. Louis University on April 29, 1990. In 1975 Bob also became involved in research at the Scottish Rite Psychophrenic Research Program in Lexington, Massachusetts, a position he owed in part to his being a 33rd-degree Mason, and one that he held until 1985.  He remained a national force in the world of psychiatry until his death inSun City,Arizona, in 1990.  One of Osborne County’s most famous native sons was buried with honors in the Sunland Memorial Park at Sun City.

“It is really quite hard for me to write any adequate summation of my father’s life. . . . Robert H. Felix was a highly talented and multi faceted man, but whatever he was, whatever he became, he attributed to the foundation he was given as the son of a ‘horse and buggy’ doctor on the Kansas prairie. It is really difficult to separate my father from my grandfather, because in all that he did my father used his father’s life and teachings as both an example and for guidance.  I think of both men as pioneers.  AlthoughKansaswas well settled when my grandfather was practicing there the medicine he practiced was pioneering.  My father, building on his father’s teaching, was often referred to as a pioneer in his chosen field of mental health.  As you can read from the enclosed, he was one of the architects of modern mental health practices. My father often told me of accompanying his father on his rural rounds.  He told me of assisting his father as he grew older.  He helped by handing his father instruments, helping to hold a patient during a procedure, sometimes performed on a kitchen table scrubbed with alcohol.  This could not happen today, but my father was really in early training for the family business, for Dad was not only the son of a physician, but the grandson and great-grandson of physicians as well.  Growing up in Downs Dad often was referred to by the nickname of ‘Little Doc.’  I’m sure it was no surprise to anyone then that my father chose medicine as a career, although he did seriously consider journalism in undergraduate school.  He always said that this early training made him the man he later became.  I found it interesting that often when he was testifying before Congress to justify the budget for NIMH (National Institute for Mental Health) he would refer to himself as ‘just an old country doctor.’  More than just a ploy, this also conveyed some very basic values, ones that were obviously well understood by the congressmen. When it came time for my father to retire as director of NIMH I was completing my senior year in high school.  Though sixty years old, Mother and I knew he was far from retirement.  As one can imagine, Dad really did not have to do a job search.  His talents were in great demand, and job offers came pouring in.  The decision was really quite easy when the offer came fromSt. LouisUniversityto become dean of the medical school.  Dad saw this as a return to his roots, for his father had graduated from Marion-Simms College of Medicine, the school that later became St. Louis University School of Medicine.  Whenever someone would visit him in his office, family included, he always took them down the hall where class pictures of all the graduates hung.  He would proudly point to his father’s picture in the class of 1898.  This was in a way the very essence of the man, a man who believed that it was one’s obligation to use his talents to their fullest, but also to always honor those who came before, those who enabled him to become the great man he was. So in a wonderful way my father’s life came full circle.  Like his father before him he was a man who was deeply devoted to his God, his family and his profession.  He never really fully retired.  He and my mother enjoyed life inSun City, but ever the activist, Dad helped form Interfaith Services, an organization of more than one hundred  churches and social agencies which provided case management services primary for the frail elderly.  Fittingly in his last years he became the recipient of many of their services, ‘as ye sow so shall ye reap.’  My father reaped many honors and the recognition of those in high places, but all who knew him knew him to be a humble, exceedingly kind man.  This comes from a firm foundation, one deeply rooted in the soil ofKansas, the foundation that made him the great man he was.” – Katherine Hoenigman, daughter, June 1997.