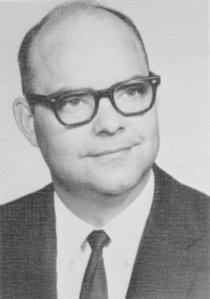 The youngest person ever inducted into the Osborne County Hall of Fame was born August 16, 1931, in Yates Center, Kansas.  Irvin Ray Linder was the son of Ernest and Carrie Maude (Lopp) Linder. During his elementary and high school years Ray, as he was commonly known, moved from Yates Center to Madison, Kansas, and finally finished his high school education in the community of Cheney, Kansas.

During this time Linder performed and excelled in all types of music. After graduating from high school, he continued on to the University of Wichita, where he received a BME (Bachelor of Music Education) in 1953 and a later MME (Master of Music Education) degree in 1961.  Ray was drafted into the army in 1959. He spent two years in the 59th Army Band which was located in Lawton, Oklahoma.

In 1959, Linder began teaching in Osborne, Kansas, taking over the instrumental and vocal music programs at the high, junior high, and grade school levels. During the next fourteen years, the Osborne Bulldog Band became known as one of the finest band organizations in the state of Kansas. The band earned thirteen first division ratings during those fourteen years, and Linder’s work with the program set the stage for continued success – from 1962 through 1982 the band earned twenty-one straight first division ratings, the second-longest such streak in Kansas history. The Osborne vocal program was an inspiration also to many of the surrounding schools. Again, when Linder arrived in Osborne, the vocal program was down. During his time in Osborne the mixed chorus reached as many as one hundred and fifty students. Finally Linder had to divide the group into girls and boys groups and a select mixed chorus.

Each year, students would anticipate bringing home many medals. Many fine musicians were graduated and continue to bring credit to Osborne through their musicianship. In 1964 band members earned twenty-eight individual gold medals at the State Music Festival; by 1971 that number had grown to eighty-four individual gold medals. In 1972 the band earned one hundred and eighteen medals, and during Linder’s final year with the program in 1973 the band received an astonishing one hundred and forty-nine individual first division ratings, an unheard-of achievement for such a small school. Throughout Linder’s fourteen years in Osborne he felt that the support of the school board, the administration, and the community, as well as the students, was incomparable. That kind of support is what makes a program strong, and that is what happened to the music program in Osborne. The students’ esteem for their instructor was evident in that at the end of each year they would give Linder a present–a string of one dollar bills from all the music students one year, and a do-it-yourself canoe kit another time. And during the final high school music concert Ray conducted the band presented him with a trophy that was not only a remembrance of them but also from the community as well, in appreciation and recognition of his many contributions both as a teacher and friend.

Ray Linder became part of the faculty at the High Plains Music Camp in 1963 and continued to be a part of that faculty until he left the teaching profession in 1980. During Ray’s teaching time in Osborne he received his Master’s Degree at Wichita State University in Wichita, Kansas. Later he was honored to become president of the Fourth District of the Kansas Music Educators Association for two terms. He was picked to lead the Kansas Phi Beta Mu music fraternity as president in 1973. Ray also became a charter member of the Kansas Band Association in 1972, and was designated as its president in 1975.

Upon leaving Osborne in 1973 Linder began teaching in Russell, Kansas, where his instrumental groups continued to receive first division ratings at competitions. That fall the Russell band performed at half-time for a Kansas City Chiefs professional football game, a rare honor for a high school band. During the two years that he taught in Russell his instrumental groups were always rated tops in their school classification. In the next five years Linder taught instrumental music at Washburn Rural High School in Shawnee County, Kansas, where his concert band gained five first division ratings, and performed and demonstrated for high schools and colleges throughout the state of Kansas.

In 1980 Ray was asked to become the Kansas State Music Consultant for the Kansas Department of Education. In part, his duties were to go to schools all over the state of Kansas to help with their music curriculum, and to develop guides for teaching music in all areas of music education. Musical activities developed statewide were his responsibility.  His influence on music educations in Kansas during his tenure with the State Board of Education was extensive.  He supervised and edited four Kansas State Department of Education publications in program development.  He authored numerous curriculum documents for Kansas schools during his tenure.  Linder also authored various articles for the “Kansas Music Review”.

Ray was active professionally, including KMEA (Kansas Music Educators Association) and MENC (Music Educators National Conference).  He was secretary of MENC’s National Council of State Supervisors of Music from 1985-1987 and president of Kansas Iota Chapter of Phi Beta Mu in 1975.

Ray Linder retired in 1994 after twenty-five years of teaching in Kansas public schools and fourteen years as the Kansas State Music Consultant. He married his wife, Joey (the former Barthilda Jo Crandall), on August 15, 1953, in Wichita, Kansas, and had one daughter, Janice, who also became a music teacher. Throughout Ray Linder’s working life he felt very fortunate to have been around great students, supportive parents, and administrators who were enthusiastic in their support of music education in their schools. Ray and Joey retired to Bella Vista, Benton County Arkansas, where they enjoyed musical activities, playing golf, helping with church, participating in clubs and living life to its fullest. Ray passed away in Bella Vista on October 22, 1999. In 2001 Ray was posthumously inducted into the Kansas Music Educators Association Hall of Fame.