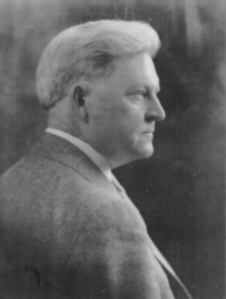 The third of seven children, Charles Elliott Mann was born February 9, 1870, on a homestead near Blue Springs in Gage County, Nebraska. The son of the Reverend Henry and Maria (Minard) Mann, Charles was six years old when the family moved from Nebraska to Eastland, Texas. There his father took charge of the Methodist Church while Charles attended the local schools, graduating from Belle Plaine College. At the age of eighteen he went to work in the print shop of the Eastland Review. The next year the Mann family moved to Norton, Kansas, where Charles went to work for the local newspapers. He then worked for papers in Oberlin and Phillipsburg, Kansas, and at Gering, Nebraska. At Gering he met and married Ethel Lovell on April 24, 1901. They had three children, Janice, Stuart, and Charles.

In 1905 Mann came to Downs. In partnership with William Ransom he bought the Downs News. Eleven years later they acquired the rival Downs Times and merged the two weeklies. Man and Ransom’s partnership lasted a total of fifteen years, until Mann left in 1920 to become editor of the Osborne County Farmer.

A staunch Republican, Mann was elected Osborne County’s representative to the Kansas Legislature in 1918. Re-elected to a second term, Mann also served as Speaker of the Kansas House of Representatives in 1923. Five years later he returned to the legislature as a state senator, serving two terms.

As editor of the Farmer Mann exerted influence across the state. He was a brilliant and talented writer whose column Down Near the Short Grass Roots was widely quoted. Mann was deeply interested in the history and traditions of Osborne County and did much to preserve the stories of the early days of the county. He was a member of the National Editorial Association and of the Rotary Club, Masonic Lodge, and Order of the Eastern Star in Osborne. In 1933 he was granted life membership in the Kansas Illustriana Society.

Mann’s first wife died in 1925. On September 28, 1927, Charles married again, this time to Laura (Booz) Smith, a widow with two children, Lola and Cyril. Mann continued as editor of the Farmer until 1942, when he stepped down after 23 years. In 1948 Mann moved to Topeka and served on the public relations staffs of Governors Frank Carlson and Edward Arn until his retirement.

“I remember him as a quiet, understated man, full of dignity, who was never happier than sitting back in a chair spinning stories for a small, appreciative audience . . . [He had] a keen sense of humor. He used to joke that he always voted for the best candidate – it wasn’t his fault if those were Republicans.” – Marilyn Mann, granddaughter.

Charles Elliott Mann passed away January 19, 1958, in Topeka and was laid to rest in the Osborne Cemetery. His death was marked and lamented far and wide across Kansas and Kansas House Resolution 15 was passed in his memory.

ORIGINAL MOTIONS AND RESOLUTIONS
House Resolution No. 15–Resolution Relating to the death of Charles E. Mann
“WHEREAS, Charles E. Mann, former member of the House of Representatives, and former Senator, departed this life January 19, 1958, in Topeka, Kansas, at the age of 87 years; and

“WHEREAS, Charles E. Mann was born February 9, 1870, in Blue Springs, Nebraska. He edited the Downs News from 1905 until 1920, and later was editor of the Osborne County Farmer for twenty-three years. He was a brilliant and talented writer and his column Down Near the Short Grass Roots was widely quoted in papers all over the state. Mr. Mann was vitally interested in the history and traditions of Osborne County. He moved to Topeka in 1948 to serve on the public relations staff of Gov. Frank Carlson and Gov. Ed Arn until he retired. Mr. Mann is survived by his widow, one daughter and one son, six grandchildren, seven great-grandchildren and one sister. He was a member of the Lowman Memorial Church of Topeka the Masonic Lodge, Order of the Eastern Star and the Rotary Club in Osborne. He served in the House of Representatives from the 84th district during the 1919 and 1921 regular sessions, and the 1919 and 1920 special sessions of the Legislature; and as Senator from the 34th district during the 1929 and 1931 regular sessions and the 1930 special session of the Legislature; and was speaker of the House in 1923; and