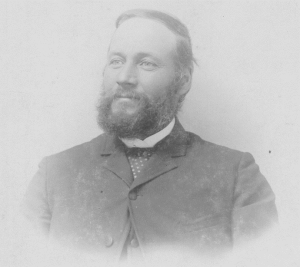 Seth S. Reynolds certainly could never have been called lazy!  He was born in Lawrence County, Pennsylvania, on September 12, 1848. He married Amanda Cain on November 4, 1869, and they had two sons John and Harry. During this time the Ku Klux Klan was a dreaded and powerful group in Pennsylvania. For reasons not known, some of them were in a cemetery and Reynolds made them leave. His wife became so distraught and fearful that she suffered a breakdown and was institutionalized for the remainder of her life. Reynolds was forced to leave Pennsylvania because of the Klan, and he brought his two sons to Kansas in 1879. They settled on a claim in Round Mound Township in Osborne County where he practiced medicine for many years.

Although he did not have a medical license, he had gone through some training in Pennsylvania. Seth was a careful recordkeeper of his daily affairs and he had journals of all kinds in order to keep up with his various activities.  His index of charge accounts listed 195 families and attests to his good bookkeeping skills. The prices included the following: consultations–twenty and forty cents; consultation and medicine–fifty cents; medicine and birth of child–one dollar and fifty cents; castor oil–ten cents; lancing a foot–thirty-five cents; night house calls–one dollar and fifty cents, and two dollars; bile beans–five cents; oxygen sitting –ten cents; and obstetrics and night watching–three dollars. He evidently had a “hospital of sorts” in his home, as he also charged the following as rates on his home care: remaining a half-day–two dollars; remaining one night and another half-day–six dollars.

Not only did Reynolds tend to the medical needs of his patients, he also served as a dentist. Prices listed for extractions varied from 25 cents to 35 cents for one tooth, and 50 cents for two or even three teeth pulled. It is told that his son John straddled a man called Pete Habel and held him down while his father was free to use both hands to pull a tooth.

Seth could be called a real entrepreneur in other business ventures, too. For payment of medical bills, many could not pay cash and among the payments he accepted were: barbed fence wire–fifty cents; tallow–thirty cents, one pig and turkey–one dollar and sixty cents; one pair of socks–five cents; soda crackers–ten cents, three and a half yards of calico–twenty-eight cents; one rooster–twelve cents; butter and eggs–fifty cents; beef meat, twenty pounds at four cents (eighty cents); He did veterinarian work, dispensed medicine, and charged one dollar for castrating a colt.

When Seth Reynolds later moved into Natoma, he started a medical office and jewelry shop. Reynolds was an original shareholder of Natoma’s First National Bank when it opened in 1909. He later built a new two-story home on West First Street, which housed four generations before being sold–Seth, his son John and family. When World War I broke out he served his country as an army doctor.

Upon returning home he retired from his medical practice. Seth Reynolds died April 2, 1922, and was buried in the Natoma Cemetery.