When he was eight years old Franklin Antone Rothenberger was given the title of stonemason.  By the end of his life he had literally built the foundations of Osborne County and a good deal of Northern Kansas as well, and the name Rothenberger had become a synonym for quality workmanship, a distinction carried on by the masonry family he founded into the present day.

Frank Rothenberger was born April 15, 1862, in Muhlenberg Township, Berks County, Pennsylvania, the youngest of nine children.  His father, stonemason Franklin Anthony Rothenberger, had died three months before of tuberculosis.  Over the next five years Frank’s mother, Sarah (Folk) Rothenberger, held the family together while they lived with relatives.  While Frank’s baptized name was Anthony Franklin Rothenberger, he disliked it and so changed his name to Franklin Antone.

In 1867 Sarah married Richard Ruth, a tailor, in Reading, Pennsylvania, and Frank began school in the city.  After a couple of years Frank’s parents petitioned Major Henry D. Markley, the Reading organizer for a new colony heading into the West, for inclusion in the colony.  They were accepted and and the Ruths, together with Frank and his half-brother Richard Folk Jr., were the only family to accompany the colony’s scouting party that headed to Kansas to find new lands for the colonists.

Every member of the colony had to have an official occupation of primary benefit to the colony, and Frank was designated a stonemason in his father’s memory.  The scouting party for what later became known as the Pennsylvania Colony left by train from Lancaster, Pennsylvania, on April 10, 1871.  Five days later – Frank’s ninth birthday – the colony reached the end of the railroad at Waterville, Kansas, where they then organized a wagon train for the remaining trip west.  On May 1, 1871, the scouting party laid out the townsite of Osborne City in Osborne County, Kansas.  That September the rest of the colony, 250 strong, arrived at the new town.

Over the next fifteen years Frank attended school, played with visiting Indian children, and worked on his stepfather’s and his older brother Peter’s farms.  Peter had also been a member of the colony and taught Frank the basics of masonry and construction work.   On July 16, 1886, Frank married Viola Mark in Osborne.  They had ten children, with five having passed away at an early age.

Frank formed the Rothenberger Masonry Company in 1884 and over the next fifty years completed several thousand jobs not only in Osborne County but over a large part of Northern Kansas as well.  At first he walked to his work, his tools in a bag slung over his shoulder, helped along by two staffs that greatly aided him over long distances.  Later he often bicycled to sites as far as fifty miles away.  For large jobs a buckboard served the purpose.  In many instances he worked at two or three different jobs at once.

As his five sons became older they served as Frank’s workmen for the ever larger jobs he was contracted for.  Some of the larger structures the company tackled included high schools at Webster and Covert, Kansas (twice), the Christian Church in Smith Center, Kansas, the Osborne Municipal Light Plant, and St. Joseph’s Catholic Church in Damar, Kansas.  The last mentioned took five years to complete, with the building stone having to be hauled by train and horse & sledge from a quarry thirty miles away near Waldo, Kansas.  This church sports such unusual structural features as concrete window frames and recently was  finalist for the 8 Wonders of Kansas Architecture. 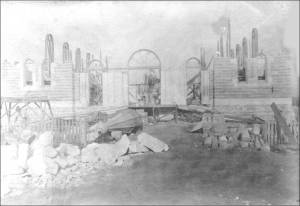 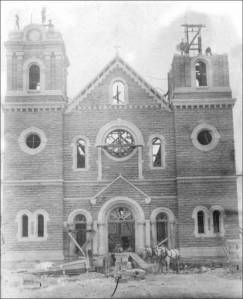 After Frank’s sons grew to manhood they each went into masonry and construction work.  Their sons in turn took up the work, and fifth-generation Rothenberger construction companies currently operate at jobsites from California to Texas and in overseas countries such as Venezuela.  Each succeeding generation has maintained the Rothenberger tradition of honest quality work begun by Frank.

Frank was a lifelong lover of music, singing in many services and for many occasions at the Christian Church in Osborne.  He was also active in the community through membership in the Odd Fellows Lodge.  But his major contribution to the history of the community and county remains the many sidewalks, walls, bridges, and buildings in Osborne and elsewhere that are living monuments to his toil, as well as a large number of homes.  His last few years were spent caring for his wife and enjoying their last years together.  Frank Rothenberger passed away April 2, 1946, at the Ingram Nursing Home in Corinth Township, Osborne County, and was buried in the Osborne Cemetery, the last member of the original Pennsylvania Colony in Osborne County.