“What can we set down in cold print about Howard H. Ruede that will do the man justice?” – Bliss VanGundy, Osborne County historian.

H. H. Ruede Dead
End Came to Local Editor of the Farmer Thursday Night after an Illness of Two Weeks 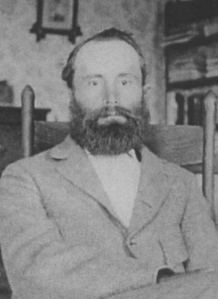 “Howard Herman Ruede was born in Bethlehem, Pennsylvania, June 25, 1854. He was the eldest child of Herman and Marie (Smith) Ruede. He was educated in the Moravian Parochial Schools in the town of his birth. He afterwards learned the printing trade, with which he was connected until coming to Osborne County in March 1877. He settled in Kill Creek Township where he resided on a homestead until June 1901 when he removed to Osborne, Kansas, where he has since lived, and has been connected with the Osborne County Farmer practically all that time. On April 10, 1870, he united with the Moravian Church of Bethlehem, Pennsylvania, of which he remained a faithful member until he united with the Presbyterian Church in Osborne in 1901. He passed away at his home in this city on Thursday evening, April 9th, aged seventy years, nine months and fifteen days. He leaves to mourn his passing his sister, Miss Ruth Ruede, his brother George F. Ruede of Wichita, Kansas, and his nephew, Eugene Ruede of Omaha, Nebraska.

“Howard H. Ruede, who has been connected with the Osborne County Farmer more or less intimately for nearly half a century and who was personally known by more people in Osborne County than any other man, passed away at his home in this city on Thursday evening, April 9, 1925, at 11:30 p.m. He had been in poor health for several weeks, but in spite of it he remained at his work in this office until Saturday night, March 28th, attending to his duties as usual. He had been suffering from the effects of a severe cold which bothered him for two or three weeks, but he was a man who never complained nor shirked a duty, and while those of us who worked with him every day noticed and remarked a hoarseness and cough that was unusual, none of us suspicioned that he was approaching his fatal illness. On Monday morning, March 30th, he was unable to come to the office. He was feeling badly and had a high temperature. He thought if he would lay up a few days he would be able to come about the middle of the week. This was what we all hoped for, but while the fever subsided somewhat and there were now then hopeful symptoms, he seemed to gradually lose strength, and all hope was abandoned by relatives and friends by the beginning of the second week. He was conscious much of the time, but whether he was rational or wandering in his mind, his thoughts were with his work at the Farmer office, where he was happiest in his life work.

“Howard Ruede was not what is known as a ‘mixer.’ He knew himself hundreds of people, and could call most of them by their first name, but unless one worked at his side for years it was impossible to know his true worth. He was the most conscientious man this writer ever knew. He was absolutely dependable and trustworthy in all that those terms imply. Those who met him daily liked and respected him for his unfailing courtesy and his proverbial good humor. Those who worked by his side and came in daily contact with him, loved him for his tireless devotion to duty, his loyalty to his friends and his convictions and his unwavering fidelity and integrity. He was a man of absolute clean mind and clean life. He was possessed of a fine education and had added largely to his stock of knowledge by wide reading and by observation. Had he been obsessed with a desire for wealth he could have turned his shrewd mind in that direction and amassed a fortune, but he cared nothing for money except as it ministered to his simple needs. Financially he could not be called a successful man, but measured in good deeds and in character he towered like a giant, and his life in this community was one of its most valuable assets and one worthy of emulation. He will live in the memory of those who knew him best long after the names of many so-called successful men have been forgotten.

“Dozens of people have asked us in the past few days, ‘Who will take Howard’s place on the Farmer?’ To all we have been obliged to give the same answer: No one can take Howard’s place. Someone can perhaps come in and take up the daily routine of visible duties that were his, but his wise counsel, his intimate knowledge of Osborne County men and Osborne history, and his daily example of fidelity to duty, are things that passed out with him, and can never be replaced. He was like eighteen-carat gold; the more one came in contact with him, the more one applied the acid test, the more one valued his actual worth. Truly it can be said of him in the words of Marc Anthony:

‘His life was gentle, and the elements
So mixed in him that Nature might stand up
And say to all the world:
This was a man!’”

In March 1877 Howard Ruede stepped off the train at Russell, Kansas, hitched a ride to Osborne, and filed a claim on land in Kill Creek Township amid other settlers from the Bethlehem area. That same year he began working as a printer for the Osborne County Farmer, walking the fourteen miles between Osborne and his homestead in the Kill Creek community. Over the next two years Ruede kept his family back in Pennsylvania informed of his activities on the prairie through a long series of letters, until his parents and siblings also came west and joined him on the homestead. In 1879 he donated land along the west edge of his homestead for the establishment of the Zion Mennonite Cemetery, now called the Kill Creek Presbyterian Cemetery.  A bachelor his entire life, Howard Ruede worked for the Osborne County Farmer for nearly fifty years, frequently writing articles of historical interest that displayed a sense of humor and attention to detail.

“The passing of Howard Ruede removes the last connecting link between the Farmer of the pioneer days and the present Farmer of modern times. The Farmer was a pretty puny infant when Howard first stepped into the little shack that housed it way back in the summer of 1877. The office then stood about where the Olds grocery store now stands. He was but twenty-three years of age and had learned to set type back in Pennsylvania. He worked on the paper in 1877-1878 a good deal of the time. He told me only last February that he made his living off the Farmer the first two years he was in Osborne County.

Then he decided to try farming and went out into Kill Creek Township to break the virgin sod. He stuck to it with his usual faithfulness and for twenty-five years he worked early and late and went against all the privations and hardships so prevalent among the pioneers of those days. Then he removed to Osborne and ever since has been connected with the paper. In fact, he was really connected with the Farmer during his stay in Kill Creek, for he was the Kill Creek correspondent all those years and his items were sent in regularly and if pasted in one string would reach a goodly distance. So Howard’s connection with the Farmer outranks all others, approaching almost fifty years – forty-eight, to be exact.

But the Farmer boasts of long service from those who have been connected with it. Frank H. Barnhart, the founder, stayed with it about sixteen years. Charles Landis was with it for nineteen years and owned it about sixteen years. Tom Skinner had the longest consecutive years of service. Unless I am badly mistaken, Tom was with the paper from 1882 until 1921. I started on the Farmer in October 1897 and have been owner since August 1, 1904. But Howard Ruede was the historian of the paper. He remembered everything that happened during the babyhood days and on down through all the years up to the very hour he left the office the last time to return no more. He was the most reliable and accurate person with whom I ever associated. He was always right on hand when you wanted him and when told to do anything he never forgot the errand. You could set your watch by his daily routine. Day after day and year after year everything left to him was done at the appointed time. He kept all his work right up to the minute, and he did it so quietly and systematically that he was never in a hurry. He could remember every advertisement and paid local in the paper and its price; he knew whether his local event or that one had appeared in the columns and just about when. He knew nothing about politics or baseball or football, but he knew so much else that those trivials were never missed. Of late years he never appeared to be busy, but when he was absent for a few days the little things he always looked after piled up until they became a mountain and very seriously affected the usual routine of work.

The thing that made Howard so reliable and dependable was that he never tackled anything he didn’t know. He always stayed with the duties and work he could handle and experiment was something he knew nothing about. He either did it or he did not. Consequently he made few mistakes. Howard was so regular on his beat and in his haunts that he will be sorely missed. The arriving and departing trains will miss him, the post office lobby will miss him and the business houses will miss him on the first of every month. His soul was as clean and spotless as the morning sun and no dishonest thought or sinister feeling ever entered his mind and he has entered upon his reward with all the glory and honors of the greatest that ever trod the earth.” – Bert Walker in the Osborne County Farmer, April 16, 1925.

In 1928, three years after Howard’s death, University of Kansas economist John Ise was in Osborne conducting research for his forthcoming book Sod and Stubble.  He spoke with Ruth Ruede, Howard’s sister, who showed Ise the letters Howard had written to the family in Pennsylvania those many years before.  Ise took the letters and, by combining them with some of Howard’s newspaper articles, had them published as the book Sod-House Days: Letters from a Kansas Homesteader 1877-1878 in 1937.

Still in print over 75 years later, both Sod-House Days and Ise’s own Sod and Stubble are together considered to be two of the finest literary works on the homesteading life of the Great Plains ever written in either the United States or Canada.  It is for this reason that Osborne County is known as The Homestead Literature Capital of Kansas.

In 2006 the Rediscovering Sod-House Days Self-Guided Driving Tour was established in the Kill Creek community for readers around the world to discover the actual sites of people, places, and events made famous by Howard Ruede and his writings.  It was designated an Osborne County Heritage Backway in 2012. 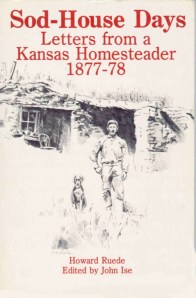