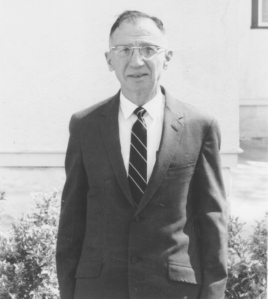 Hilland Homer Stewart was born on a farm near Harlan in Smith County, Kansas, on March 17, 1906.  At the age of two he moved with his parents, Lewis and Perle (Brumbaugh) Stewart, to Graham County, Kansas.  He received his early schooling there and graduated from Palco High School in 1925.  Hilland spent two years at Fort Hays State College before returning to Graham County, where he worked as a grocery clerk.  In the 1930s Hilland entered the Denver [Colorado] Bible Institute, from which he graduated in 1937.  He remained at the school as an instructor and was ordained a minister in 1940.  From 1941 to 1945 he was managing editor and Sunday School Expositor for the Institute’s monthly magazine, Grace and Truth.

The Reverend Stewart married Myrtle Lewis on August 17, 1941, in Lakewood, Colorado.  The couple raised three children–Constance, Samuel, and Sue.  Hilland completed his education at Sterling College in Kansas and at Wheaton College in Illinois, and also spent a term teaching classes at Harlan High School.  From 1947 through 1980 he served as pastor at churches in Cedar and Harlan in Smith County, Kansas; at the Bethany Baptist and Pleasant View Churches and in Hunter, all in Mitchell County; in Luray and at Amherst Church in Russell County; and at the Cheyenne, Rose Valley, and Grace Brethren Churches in Osborne County.  When he was called to be pastor of the Grace Brethren Church in Portis, Kansas, in 1947 he reached a special goal–that of following in the footsteps of his grandfather, David Brumbaugh, a early-day circuit-riding minister from that church.

In 1947 the Stewarts bought the equipment and shop of the defunct Portis Independent newspaper and established Stewart Publishers, a Christian publishing operation.  Hilland had learned the printer’s trade while in college and ran the Linotype himself.  In later years he performed the same task for the Osborne County Farmer.  Stewart Publishers printed Bible studies and other religious material, including Hilland’s book Life in Full Color, which was widely distributed.  But the principal product was the Mighty Mite Bible, a miniature-sized booklet designed for youngsters attending Christian Youth Camps.  First published in 1967, thousands of copies of the Mighty Mite Bible were sold all across the United States over the next two decades.  A fire in 1985 destroyed the print shop and Hilland had to take the printing business for the Mighty Mite Bible to other area printers.

Hilland was also interested in photography and prepared thousands of slides for use in illustrating Biblical teachings.  He wrote many articles on religious topics, several of which appeared in The Christian Victory, a nationally-circulated journal.  In the 1960s he was named to Who’s Who in the Midwest.  Reverend Stewart passed away on February 2, 1995, and was laid to rest in the Hammond Cemetery near Harlan, Kansas. 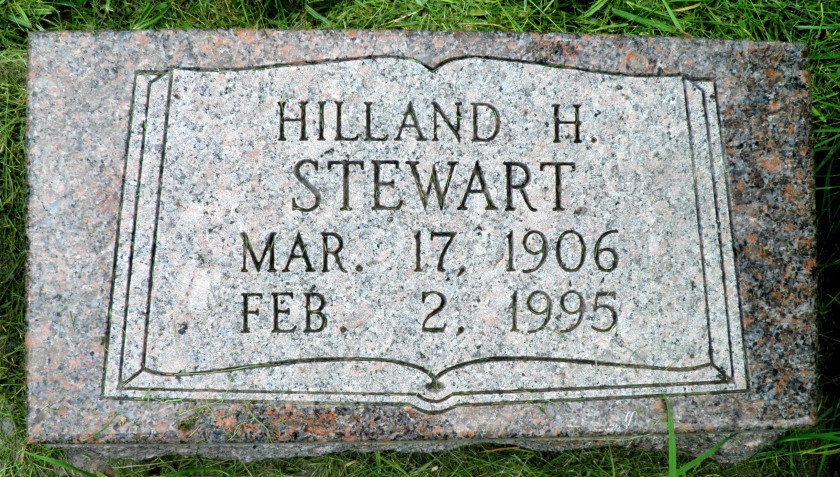