(On this date, October 5, 2013, the Osborne County Hall of Fame is pleased to present to the world the first of the five members of the new OCHF Class of 2013)

Department of Diagnostic Medicine and Pathobiology 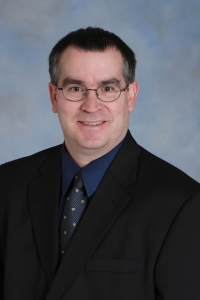 It was in high school that he met and started dating Joan Winkel from Glen Elder, Kansas and the two were married in 1979.   Following graduation from high school in May of 1977, Mike attended Kansas State University majoring in Wildlife Biology.  He was accepted into the College of Veterinary Medicine at Kansas State University in the fall of 1980.  Mike was awarded his Bachelor of Science Degree in 1982 and his Doctor of Veterinary Medicine Degree in 1984.

After graduating from the College of Veterinary Medicine, Mike, Joan and their son Shawn moved to Beloit, Kansas, where in May of 1984 Mike worked as a mixed animal practitioner with Dr. Charles Luke at the Solomon Valley Veterinary Hospital.  Mike, Joan and Shawn moved to Wichita, Kansas where he was employed in August 1985 as a small animal practitioner at Bogue Animal Hospital West.

Then in July 1986 Mike was accepted as a Graduate Research Assistant in Veterinary Parasitology at Purdue University’s College of Veterinary Medicine in West Lafayette, Indiana.  Mike, Joan and Shawn moved to West Lafayette in August 1986.  Their daughter Sarah was born while they were at Purdue.  During his graduate program at Purdue his studies included both Veterinary Parasitology and Medical/Veterinary Entomology.  With his primary research focus being the biology of fleas infesting dogs and cats.  He was in fact the first veterinarian in the world to get a doctorate studying flea biology.  At Purdue University Mike earned both a MS (May 1988) and a PhD (May 1990) in Veterinary Parasitology.  It was while a graduate student at Purdue that the veterinary students started calling him “Dr. Flea.”

Upon completion of the graduate program Mike accepted an offer from the College of Veterinary Medicine at Kansas State University and in June of 1990 Mike, Joan, Shawn and daughter Sarah moved to Manhattan KS.

Mike is recognized as a passionate educator.  He co-taught the Veterinary Parasitology course in the College of Veterinary Medicine from 1990 to 2001 and became course coordinator in 2002 and has been a guest lecturer in several other courses.  In 2010 along with Dr. Patricia Payne he developed the “Evidenced Based Small Animal Clinical Parasitology Training Course” at Kansas State University.  The unique course is the first of its kind developed in the world.  This week long course is designed to provide technical service veterinarians working in industry and veterinarians in academia a comprehensive clinical education in the areas of the biology, epidemiology, treatment and control of fleas, ticks, mites, heartworms, and intestinal parasites of dogs and cats.  Since 2010 almost 100 veterinarians from the U.S., Canada, Australia and Europe have attended the course.  The course has become so popular that the sessions book up a year in advance.

At the College of Veterinary Medicine at Kansas State University Mike has developed a research program that has been involved in three primary areas: (1) biology and control of fleas and ticks infesting dogs and cats, (2) investigations into the interactions and disease transmission of urban wildlife with domestic pets and humans and (3) diagnosis and control of gastrointestinal parasites of dogs and cats.

Research projects in the area of flea and tick biology and control have constituted the majority of this research effort. His research team has conducted laboratory and field evaluations of prospective flea and tick products in Manhattan, Kansas and Tampa, Florida, including investigations of the largest selling flea and tick products in the world; ActivylÒ, AdvantageÒ, CapstarÒ, ComfortisÒ, FrontlineÒ plus, K9 AdvantixÒ, ProgramÒ, RevolutionÒ, SentinelÒ and VectraÒ 3D.

Conducting such a large research program has necessitated cooperative research with numerous faculty and students.  The team has co-authored research grants and publications with faculty and graduate students in the Departments of Clinical Sciences, Entomology, Biology and Electrical and Computer Engineering at Kansas State University.  He has also co-authored publications with numerous researchers at other Universities.

“The world has more than 2,000 different kinds of fleas, but there is only one species that commonly infests dogs and cats in North America. Americans spend more than $1.5 billion a year trying to fight this pest on their pets. Michael W. Dryden says people should know their enemy and not assume all flea products are created equal.

“Dryden is considered one of the world’s foremost experts on fleas and ticks that infest dogs and cats and was once the subject of a documentary about his work with fleas. He has been an expert source on fleas for The Wall Street Journal and ‘Good Morning America.’” – From Kansas State University Short Bios at http://www.k-state.edu/media/mediaguide/bios/drydenbio.html.

In 2007 Mike was honored to receive an endowment from the Merial Corporation to establish the “Dryden-Merial Tick Research Center at Kansas State University”.  This endowment help fund a tick research laboratory and provide salary for an additional research technician.

Mike’s clinical parasitology research has generated over 125 basic and applied research journal articles, 8 book chapters and over 100 published scientific abstracts.  The importance of his research on the veterinary profession and his passion as an educator is exemplified by the fact that he has been invited to lecture in over 21 countries (many multiple times), presenting over 850 invited seminars at national and international scientific conferences, numerous colleges of veterinary medicine around the world and dozens of veterinary continuing education symposiums. His research has also received both National and International media recognition with Mike appearing in segments on Good Morning America, CBS This Morning, the Discovery Channel, Mona Lisa Productions in France, and televised appearances in Canada, England, and Spain, and interviews and articles in over 100 newspapers and magazines.

Mike has been recognized with numerous awards and honors.

Examples of his photography can be found at www.drmichaeldryden.com.