(On this date, October 15, 2013, the Osborne County Hall of Fame is pleased to present to the world for the first time anywhere the fourth of the five members of the new OCHF Class of 2013) 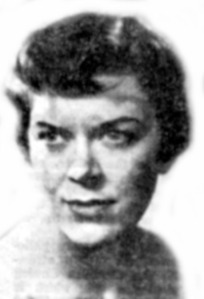 Arlene Louise Sollenberger was born in Natoma, Osborne County, Kansas, on November 19, 1920, the only child of Versa (Dorr) Sollenberger and Jesse C. Sollenberger.  Both of her parents were well-known musicians in their own right.  After growing up in Osborne and graduating from Osborne High School, Arlene earned a bachelor of music education degree from Bethany College, Lindsborg, Kansas, with majors in piano and clarinet.

Arlene then taught school at Garfield in Pawnee County, Kansas, and at Stafford, Stafford County, Kansas.  Returning to college, she earned a Master of Music Education degree and Master of Artistic Voice degree from the University of Michigan’s School of Music at Ann Arbor, Michigan.  For the next nine years Arlene taught at the Michigan School of Music and was a soloist with symphonies, oratorios and recitals.  She also sang with quartets including one that appeared regularly on the radio and two others at churches.

In 1956 Arlene applied for and received a Fulbright Scholarship for a year’s study at the Hochschule für Musik und Theater in Munich, Germany.  She was then appointed Associate Professor of Music, Voice, at Texas Christian University in Fort Worth, Texas, in 1959, becoming a full professor in 1968.

“A further entry in Texas Christian University’s fine arts festival for this year devoted to the arts in Italy was presented Monday night in Ed Landreth Auditorium.  The event was an Italian song recital by Arlene Sollenberger, soprano, with Adrienne Mora Reisner at the piano.  The operatic aria, “O Don Fatale” from Verdi’s “Don Carlo”, was quite the high spot of the evening, in which the singer’s stunning personality made a basis for some magnificent singing.  The wide range and brilliant top notes earned an ovation.” – Fort Worth Telegram, August 13, 1965.

After 27 years at the university Arlene elected to retire in 1986, retaining the title of emeritus associate professor of music.

Arlene was a member of the Fort Worth Music Teachers Association and regional governor for the National Association of Teachers of Singing.  The National Federation of Music Clubs gave her life membership following a concert at their Texas state convention.  Arlene’s many other memberships included the Overton Park United Methodist Church; Sigma Alpha Iota sorority (received the Sword of Honor); Phi Kappa Phi sorority; Pi Kappa Lambda sorority (served on National Board of Regents; Tau Beta Sigma sorority (honorary member), National Association of Teachers of Singing; National Federation of Music Clubs (life member); Altrusa Internations, Inc. of Fort Worth; Women’s Club of Fort Worth; the E. Clyde Whitlock Music Club; and the Euterpean Club of Fort Worth (director of Euterpean Singers).

Among the honors Arlene received was being named to Who’s Who, South and Southwest, 1980, Personalities of the South (11th edition, 1980).  She was also the recipient of both the 1981 Contribution to the Arts Through Music from the Personalities of America and Bethany College Alumni Association’s Alumni Award of Merit in 1988.

In 1984 Arlene gave the funds to install the organ and carillon in the United Methodist Church in Osborne, Kansas, as a memorial to her parents, Jesse and Versa Sollenberger.   She passed away at the age of 81 on Wednesday, December 12, 2001, in Fort Worth, Texas.  Services were held at the Overton Park United Methodist Church in Fort Worth.  Arlene was then laid to rest next to her family in the Osborne Cemetery at Osborne, Kansas.

As a final gesture to her hometown, Arlene’s last will and testament created a trust which directed that three-fourths of the annual net income of the trust was to be distributed to Unified School District No. 392 for student scholarships, while one eighth was to go to the United Methodist Church at Osborne, Kansas, and the final one eighth would go to the Osborne County Genealogical & Historical Society of Osborne, Kansas.